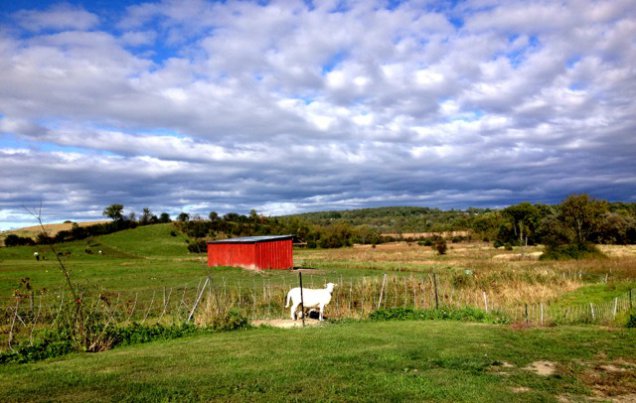 We swerved off the state highway, and bounced down an embankment onto an unlikely looking gravel track, a tunnel of overgrowth that clawed the sides of the car. Following the rough road, we lurched and jolted through woods and then suddenly across someone’s farmyard, between the house and barn. Chickens scattered, and a farmer blandly looked up from repairing his tractor.  We kept going, for miles it seemed, twisting and bumping through thickets, past a swamp, up and down wooded hills, across fields and past another house.  The track turned sharply left and careened down a steep gravel hill into a sunny vista of spreading green fields that embraced long, red barns and tall blue silo.

There were no signs to tell us that we had arrived at the famed WhistlePig Farm in remote Shoreham, Vermont, source of the most celebrated straight rye whiskey in the world.  Visitors seemed an uncommon occurrence. The farm dozed tranquilly in the sun.  There was nobody in sight.  A few pigs nosed quietly in pens nearby.  A sheep peered at us from across a field. Cows grazed in far pastures.  Crows cawed from the woods and gentle breeze wafted across a meadow.

We found Larry Swanson, our host, in a sunny office that was once a former milking parlor and part of a long, low dairy barn. The barn once housed over 200 cows but is now stacked with wooden casks of aging rye whiskey. Larry greeted us warmly and introduced us to Jezebel, the office dog, who gave us a cautious sniff and tentative tail wag before laying back down in a pool of sunlight and going to sleep.

A small cabinet stood to one side, its top crowded with an alchemist’s assortment of vials, bottles and mason jars containing various shades of amber liquid, labeled with a glued scraps of paper, medical tape, old file stickers or simply scrawled with magic marker.   This was WhistlePig’s tasting library and informal blending lab.  Before a tour of the farm, Larry offered to lead us through a tasting, selecting three of the mysterious bottles.

The first, labeled “Barrel 2891,” represented the next installment of WhistlePig’s newest offering, The Boss Hog, a cask strength rye , each bottle selected from a single finished barrel of WhistlePig’s Bond 77, an especially good year that debuted in 2011 as the eleven- and ten-year aged WhistlePig bottled at 100 proof.  Now aged nearly fourteen years, Bond 77 is better than ever. 2014’s release of The Boss Hog is planned for October 15 and will range from approximately 118 to 124 proof. Our taste was 117.3 proof and packed an incredibly rich profile. Its cask-forward flavor balanced the rye’s characteristic strong spiciness and highlights one of WhistlePig’s hallmarks, a lengthy aging, double barreled in new American oak and ex-bourbon barrels that allows the rye’s sharp, penetrating spiciness to mellow and soften.

The second, was a 100 proof, single barrel reserve with a lively citrus nose and a warm sweet flavor marked by deep butter and vanilla notes.  It was a delicious rendition of buttered-popcorn-flavored salt-water taffy.

The third bottle was marked simply “Bond 77”  and was an even-higher proof taste of the same spirit we tasted from Barrel 2891. Its beguiling nose offers the haunting scent of just-extinguished liturgical candles. And at an explosive 155.2 proof, a tiny, tip-of-the-tongue taste ignites an elegant, mouth-filling balance of spice and sweetness.  Creamy vanilla mixes with the spicy, spicy spicy essence of rye.

Larry, an organic farmer and beekeeper before joining WhistlePig as Steward of the Brand, discoursed easily on the firm’s history. WhistlePig was founded by Raj Bhakta, a former reality TV star on Donald Trump’s “The Apprentice,” soon after Bhakta’s bid for a seat in Congress.  Bhakta hired former Maker’s Mark master distiller Dave Pickerell, a highly respected distiller, and gave him the goal of making the best whiskey in the world.  Following that mandate, Pickerell aimed to develop a truly American single malt whiskey, one based on rye, rather than on barley or corn. Pickerell discovered and procured a batch of 100% rye that had been aging in Canada, which he brought to the farm in Shoreham to finish in new American oak and ex-bourbon barrels. For rye whiskey, aging is key.  Without proper aging, its taste can be harshly spicy and intense.  So, as Pickerell knew, the secret to bottling good rye whiskey is in the finishing process.  Patience and a careful aging is needed to balance and mellow rye’s aggressive exuberance.

And rye’s exuberance isn’t only in its taste. Rye is a notoriously difficult grain to distill. It foams readily and gums up equipment with sticky residue. As a result, few distillers have focused on rye and even fewer offer a 100% rye.  Without Pickerell’s intervention, the batch of rye he discovered in Canada was destined to become a mixer and flavoring ingredient - a mere minor note of spice - in a blended Canadian whiskey.  Instead, Pickerell’s finishing process saved and tamed that batch of rye to permit it to stand on its own, earning an astounding 96 point rating from Wine Enthusiast, the highest ever for a rye whiskey, as well as garnering a host of other awards and decorations.  It demonstrated to the world that a 100% rye whiskey can rival Scottish whisky as a sophisticated single malt spirit.

After the tasting, Larry gave us a tour.  The 500 acre property is not simply a showcase; it is a working farm.  Larry walked us past curly fleeced mangalitza pigs, a rare royal pig breed from Hungary’s Carpathain mountains, and small black kune kune pigs from New Zealand.  WhistlePig’s mascot and namesake pig, Mortimer, is a kune kune.  The farm also raises sheep, goats and black angus cattle. An apiary buzzes on the north side of the farm. This being Vermont, the farm’s maple trees are tapped in the Spring to produce maple syrup. The farm grows winter rye and hay on 90 of its 230 organic-certified, tillable acres, and grows more on a 700 acre auxiliary farm nearby.

The rye has been shipped to multiple distilleries in North America.  Although none of that grain has yet been featured in a WhistlePig release, because every release has been at least 10 years old, Bhakta aspires ultimately to develop a completely self sufficient enterprise on the Shoreham farm which will encompass the entire spirit making process all the way from grain to bottle.  His plans are well underway.

After taking us past a guest house, complete with a king-sized outdoor fire pit on the lawn, Larry walked us through the farm’s 100 year-old main barn, a vast, long, three-story structure that’s being renovated to house a large still, fermentation tanks, aging facilities and offices.  A distant dream, although not part of current plans, would be to develop an onsite cooperage , to allowWhistlePig to produce its own aging barrels.  Filling and labeling bottles already occurs on the farm, in the former dairy bulk tank room where milk was stored.  Because hand filling and labeling bottles is the most tedious on the farm, every member of the WhistlePig team takes a turn, each bearing a share of the burden.

With the acclaim and resulting growth of WhistlePig, bottling and labeling chores are likely only to grow.  In addition to its flagship 100 proof, 10 year WhistlePig 100% rye, the company recently offered a bigger, bolder limited edition special release of  “Triple-One,” a 111 proof, 11-year rye, named as one of the best whiskeys in the world for 2013. Only 1100 cases were produced. November 2013 saw the first release of The Boss Hog, a pure cask strength, 134 proof, 100% rye, aged twelve and half years, taken from 24 selected barrels.  2014’s release of The Boss Hog will have yet another year of aging under its belt.

Before we left, Larry shared with us a special 102 proof, Vermont-edition of WhistlePig straight rye.  Available only in Vermont and offered as a tribute to WhistlePig’s home state, the Vermont edition had a bigger, bolder, spicier taste than WhistlePig’s flagship rye.  The full tasting experience of a single sip lasts several minutes, from the spreading warmth of the first taste, the expansion of spice, floral and vanilla notes, and the lingering and lingering and lingering fade into a clean, pellucid organic freshness.

Two final parting suggestions from Larry for those who would like to use WhistlePig rye as the basis for cocktail (although we prefer to sip it straight). First, it makes a great foundation for a delicious Manhattan. Second, it serves admirably in local cocktail named for a notorious out-of-stater who played a key role in the nearby battle of Ticonderoga, a Benedict Arnold Palmer:

pour over ice
garnish with a slice of lemon