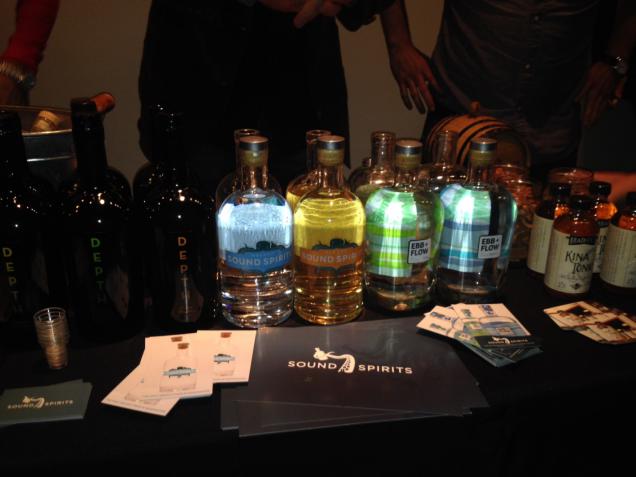 The Seattle Spirits Society was fortunate to enjoy the 2nd Annual Seattle Uncorked Grand Distillery tasting in the Old Rainier Brewery on March 2nd featuring spirit tastings from a number of local Pacific Northwest distilleries. The event entertained a sold out crowd with a line forming out the door an hour after opening for those looking to purchase day-of tickets, yet only about 10 tickets available initially. The entry fee of $25 ($30 same day) awarded 10 spirit tastings, a slice of pizza from Seattle Wood Fired Pizza (which was warranted after 10+ tastings), and an opportunity to talk one on one with local distillers for the afternoon.

Inside the venue the approximately 25 distillers were aligned shoulder to shoulder behind their tasting tables across two different tasting rooms and a large bar area in the middle. A handful of standing bistro tables occupying the center of space. To say the event was packed is an understatement, with the crowd easily able to support twice the square footage. Hopefully we’ll see continued expansion of this obviously popular event in the coming years.

A vast variety of spirits were on stage with Washington’s local distilleries including more commonly known and popular suspects such as Westland, OOLA and Woodinville’s featured whiskeys, but also some unique, abstract and fun spirits from the spirit craftsmen. Seattle Distillery featured a tasty coffee liquor which could be paired well your favorite deserts, and likewise Sound Spirits provided a number of liqueurs including a Cocoa liqueur infused with local Theo Chocolate. One of the more interesting spirits represented was locally made Absinthe, which also made for enticing tasting displays. Marteau Absinthe was particularly notable having been delicately crafted from an original 1855 French recipe. Another mentionable find, and surprise value, in the whiskey category was the Batch 206 Barrel Raider Bourbon, available onsite for a mere $28 (750ml).

While crowded, the event was truly an opportunity to speak directly with the spirit makers and intimately discuss their craft, history and future plans. This kept the event feeling “local”, just as it should. One of our favorite features of the day was the opportunity to purchase the displayed spirits at special event sale pricing. Resulting in long order lines coupled with big purchases. There was also the opportunity to view each of the featured spirits through the check-out lane.

This event highlighted the support and popularity of the growing number of local distilleries. Something we’re really excited to see. It’s evident that some distilleries, such as Westland, Skip Rock, Copperworks, and others are painstakingly paying attention to their craft.

The Seattle Spirits Society remains hopeful that events such as, “Meet your Maker”, will continue to highlight the fine craft spirits that Pacific Northwest entreprenuers are distilling.