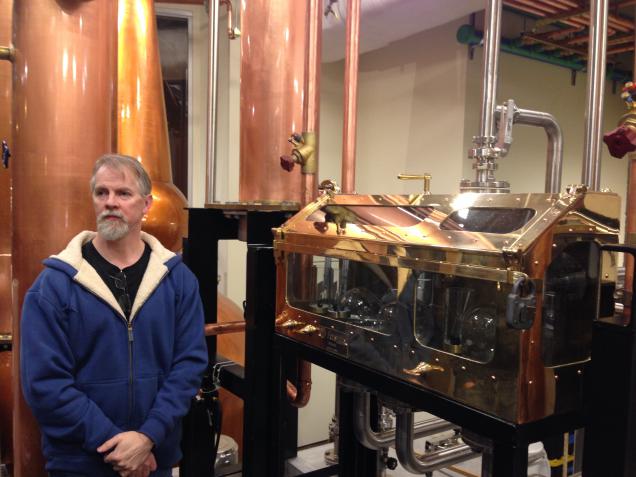 Copperworks Distilling Company is tucked under the viaduct, across from the great spinning wheel. The outside looks like your typical nondescript brick apartment building, but the inside glows with the lustrous sheen of finely engineered metal. On January 3rd several members of the Seattle Spirits Society gathered here for a tour with Jason Parker, co-owner and distiller.

The tour started out on the distillery floor with a lesson on ingredients and long term friendships. Parker has a history in Seattle, first as the primary brewer at Pike Place Brewery during their nascent years, and then later as Brewmaster for Pyramid Brewing. That work experience instilled the value of premium ingredients and led to friendships with the brewers who opened Elysian Brewing many years later. Elysian is where all the wort is made before getting to the Copperworks facility.

Parker and co-owner/distiller Micah Nutt use a malted barley base for their vodka, gin, and (coming in roughly two years) their all-malt whiskey. Parker and Nutt transport the malted barley wort to their location before adding the yeast, and making the wash. Copperworks does not use a high yield distiller’s yeast, but have opted instead for a more mellow ale yeast that yields a wash of about 8% ABV.

We then moved on to the stills. Copperworks has four, and yes, they are all copper. They are beautifully hand-crafted Forsyths stills, designed specifically for Copperworks. The wash still and spirit still are hooked up to a gorgeous spirit safe, the only functional one in the city of Seattle. The spirit still can also be rerouted through a 26-plate column still, producing a very clean, very pure, neutral grain spirit which is used to make Copperworks Vodka.

Parker was pretty excited to show us all this equipment, but his eyes really lit up when we moved on to the Gin still. This special still enables Copperworks to produce a unique gin with well-balanced floral aromas. Made with a maceration of 10 botanicals, Copperworks Gin took the Gold Medal in the gin category of the 2014 World Beverage Competition, and was a hit with the Seattle Spirit Society as well.

The attention to detail was evident throughout the entire tour. Everything from the ingredients to the space-conscience engineering was considered, and nowhere was this more apparent than in the quality of the final product.  Attendees were in agreement. Copperworks Gin and Vodka both deserve a place in your liquor cabinet.