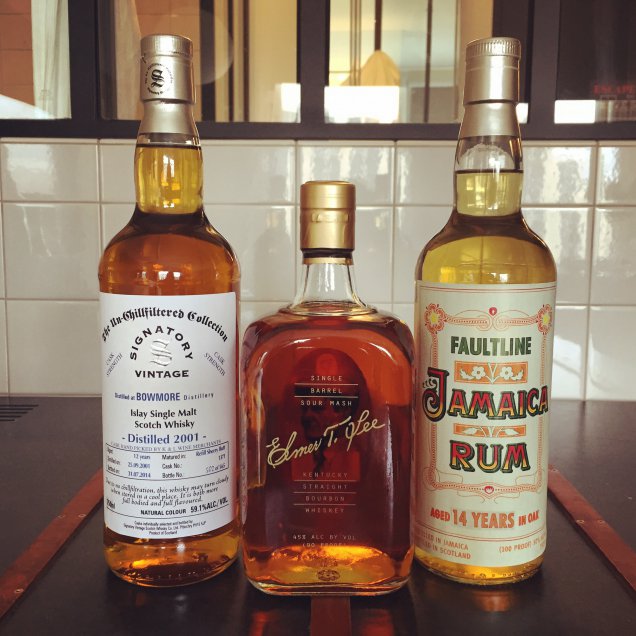 Another bottle hunting post, and many more exciting bottles found. In Los Angeles, a stop by K&L yielded three bottles for the permanent collection. David, their spirits buyer for the Los Angeles locations, turned me onto the Faultline (K&L's own brand) 15 year old Jamaican rum; it's aged in Scotland and proofed to 50% abv, and competes favorably with the Samaroli rums that can cost twice as much - we tried 3 different ones at our March 2014 tasting meeting.

I also picked up a bottle of the recently hard to find Elmer T Lee bourbon. It's currently in the top 3 on our best value list, and I expect to stay in there for a long time.

Finally, I got a 12 year old sherried, cask-strength Signatory K&L exclusive Bowmore, which is a strong buy at a little under $100.

Within 24 hours of arriving in LA, I found Jefferson's Birthday Bourbon both at my hotel bar and Jason's Liquor in DTLA. It was $150, so I passed on it, but given demand, it wasn't as much as it could be and is impossible to find in other parts of the country. It may still be there... Also not purchased there was the Weller lineup of Special Reserve, Old Antique 107, and 12 Year Old for $22, $45, and $100, respectively. You may want to hold onto those when you come across them at actual retail price.

About 50 miles south of LA at HiTime in Costa Mesa, there were some notable finds in the old & rare glass cabinets. The so called Tornado bourbon from Colonel E.H. Taylor Warehouse C was available for a cool $700, up 10x from the original $70 list price in 2012. The story goes that the walls of the Warehouse were opened up by a Tornado in 2006 and remained open to the elements for some period of time before being repaired. The resulting bourbon was very well reviewed and of course now collectable.

Also available at HiTime was a bottle of Heaven Hill Select Stock for $500 - we tasted a very close barel to this in serial number at our August 2014 meeting, but we paid a leaner $250 for it at the distillery. There’s a lot more rare stuff there, but I’ll talk about those after the next time I’m there. Note that their website does not have many of the rarer spirits available, particularly the American stuff, and be prepared to pay the going rate. Good deals can be had in other parts of the store on the main shelves or over in the Scotch glass case.