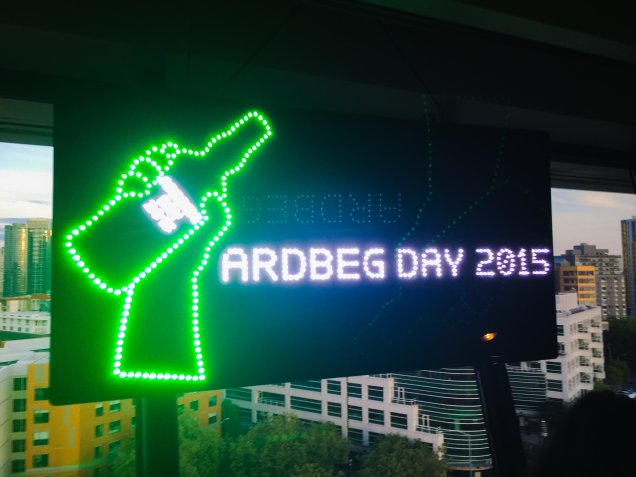 One of the Best days of the year came and went again - Ardbeg Day was May 30th, with parties across the country to celebrate Ardbeg's 200th anniversary and the release of this year's Committee bottling, the Ardbeg Perpetuum. Seattle's celebration was at the Space Needle, and had a buffet, people in Scottish garb on one side, and robot dogs and space people on the other. Like past releases, the bottling is highly sought after, and hard to get in some places. K&L Wines in Los Angeles had what appeared to be over 150 bottles on release day - so many that they lifted the one bottle limit per customer and then sold out of the entire stock in what appeared to be less than 24 hours. Seattle got limited stock, with just a few bottles going to local stores, but they're still around - Downtown Spirits has as least one bottle at the time of writing this. The Perpetuum is matured in both Bourbon and Sherry barrels and tastes like a delicious chocolate bonfire.

Speaking of celebrations, the third annual Negroni week happened - a week long charity fundariser slash Campari marketing campaign where over 1000 bars around the world will donate one dollar for every Negroni ordered. Hard to believe a scant five to ten years ago Negronis in the United States were a niche aperitivo most likely found and made well at nicer Italian restaurants. A new idea The Seattle Spirits Society can get behind: Single Malt Month!

A quick trip to Los Angeles resulted in a stop by Black Market in nearby Studio City, the Whiskey Bar by Top Chef's Antonia Lofaso, with food as good as the whiskey selection. Choice spirits on the menu included the Thomas Handy Sazerac Rye, Yellow Spot, and the Highland Park Loki, which we tasted at Meeting No. 29 in October 2014.

In early June, a stop at Portland's Multnomah Whiskey Library really raised the bar in the Whiskey Specialty bar category. The Multnomah Whiskey Library focuses on having a large selection of high end spirits, including many hard to get bottles. The vibe is private club and leather armchairs, and no standing at the bar is allowed - save that for the hallway outside the club where you'll wait some time unless you're a member which allows you to actually make a reservation to get in. This is a place that takes their whiskey seriously, provides top-notch service, and won't be rushing you out the door. Gems of the night included the Rosebank 21, which we also tasted at Meeting No. 10 in March 2013, and is still in our top five highest rated spirits of all time, and the Kavalan Sherry Cask, which was absolutely incredible.