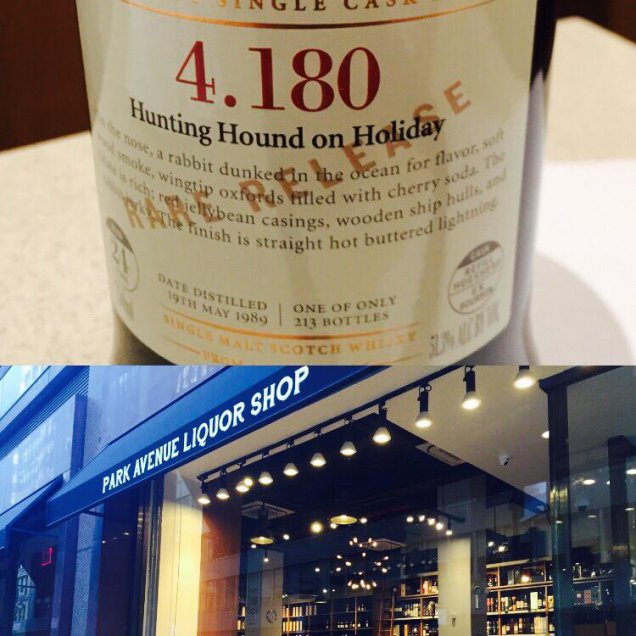 Coming off our No Age Statement themed meeting, I found an interesting bottle in that theme: Warehouse Wines and Spirits in New York has a decent stock of Talisker 175th Anniversary edition bottles, which is a NAS release containing stock as old as the 1970s. It's selling for about $50, a far departure from the $100 retail price and perhaps $120-$150 street price, if you can find a bottle. This glut of hard to find bottles is probably a result of the more serious spirits enthusiasts going to nearby Astor Wines and Spirits, and Warehouse Wines having no e-commerce website and a customer base of mostly NYU students. Grab a bottle and save - this already is a collector's edition.

Speaking of Astor Wines, they've got a few newish high-end bottlings of now silent distilleries like Convalmore 36 Year Old and Port Ellen 35 Year Old at or very close to the Diageo suggested retail price, which is certainly not cheap. If you've got a wad of hundos under your mattress, it may be worth paying roughly $1000 for the Convalmore and $3500 for the Port Ellen, and these are sure to be worth more in coming years. If you missed the boat on Port Ellen, it was closed in the early 80s, and is said to be the peat contingent of Johnnie Walker Blue. This use as a blending malt seems like a good candidate for retirement, if it hasn't already, given the high prices Diageo is asking for these special edition Port Ellen bottles.

Astor also had at least one bottle of the 2014 release of Rosebank 21. We tasted the 2011 Rosebank 21 release in March 2013 and paid $250 for the bottle, though it was then available for $200 at Binny's in Chicago. The new release is currently selling for $575 at Astor Wines. Wish you had picked up a few extra bottles? We certainly do.

Another interesting bottle that's a little easier on the wallet is the SMWS 4.180 Highland Park exclusive bottling for the Park Avenue Liquor store. I've seen this bottle in this store for at least 7 months, and they still have a good number of bottles left. No doubt the SMWS's cryptic packaging including lack of distillery name makes it hard to move off the shelves, though true Scotch aficionados know the look of these green bottles from 1000 yards away. If you need help decoding, we have a list that maps the distillery name before the period to the distillery. At $225, this bottle is about half the current street price of the official distillery release Highland Park 25, and the SMWS bottle is a preferred slightly higher 51% ABV. It's also one of the only ways to get a hold of an SMWS bottle short of becoming a member and paying the $229 membership fee.

Last week in San Francisco at Alta, which has a pretty good spirit selection, and their spirits specialist gave me a taste of Nikka Miyagikyo which was fantastic. I'm now seeing that bottle at many of the finer places in New York and San Francisco, but I haven't checked if it's easily find-able in Seattle yet. We had a Japanese Single Malt meeting in September 2014, but maybe it's time for another one.